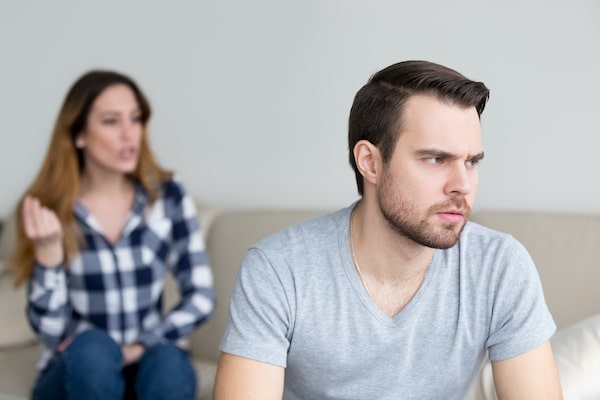 What are the signs and reasons men pull away? The most common route is questioning the whys and hows your serious relationship has turned to that.

Even most high-value women go as low as blaming themselves for the occurrence, and we’re not saying that they should not, but there’s a high chance it has nothing to do with you. It could be that your man has a fear of commitment or some other plausible explanation. Let’s look at why a man pulls away and what you can do when this happens.

If you Google “why do men pull away,” you’ll get roughly 490 million search results. Clearly, it’s a thing. The 490-million-Google questions are 1) Why and 2) What can (or should) you do about it?

The following are the main topics we will tackle:

Fear when a Man is Pulling Away

Every feminine woman tries to look at why and how their man is pulling away. The very act leaves them with lower self-esteem, and it is common for them to blame themselves. However, looking at the issue more profoundly, we can say that men have their reasons for pulling away.

A woman who knows their own value will get the sense their man is pulling away immediately after it starts to happen. The spidey senses start tingling when he starts behaving funny or doesn’t do things the way he used to. Let’s see what the top signs are when men pull away.

4 Signs When a Man Pulls Away:

This is usually a major red flag. If all of a sudden, your man starts being too busy to slot time for you, he is most likely pulling away. Try comparing how much time he spends with you with past times.

2. Reduces the Amount of Calling and Texting

At the beginning of any relationship, texting and calling are usually constant. He could be checking in every few minutes, making you feel like things are headed in a great direction. However, when they start pulling away, then the texting constantly ceases. Also, the calling may significantly reduce.

Women tend to perceive the emotional availability of their partner. When you start sensing him feeling distant, the chances are high that it is happening. If he zones out when you are together, doesn’t listen to your stories, and is reluctant to share, he is most probably distant.

Men usually take the lead in making plans when they are interested in someone. If that was the nature of the relationship, then he suddenly stops initiating plans he is evidently pulling away.

8 Top Reasons Why Men Pull Away

Women tend to internalize when a man pulls away. They put themselves on center stage and analyze anything they could have done wrong. Contrary to that line of thinking, sometimes a man is pulling away because he realizes he doesn’t want a serious relationship.

During the first phase of the relationship, they may seem all in, showering you with love and constantly texting. Sooner or later, after the honeymoon phase wears off, they realize whether they were in it for lust or actual interest. If it is the former, you will likely notice them pulling away.

2. He has his Issues

Unlike women, who are prone to sharing their issues, men tend to keep them to themselves. One of the reasons why your man is pulling away may be that they want time to deal with their issues. Some men prefer to deal with their issues on the side to maintain their masculine appeal. If he views your interaction as a serious relationship, then he will make sure to resolve his issues in a timely fashion.

Some decent men realize they are dating a high-value woman and inform them before they start pulling away. Regardless of whether he has issues, there are certain extents they should not
cross.

The onset of a severe relationship may happen too fast or too soon. Remember that every person has a core attachment style which makes them react differently to affection.

After the honeymoon phase and the novelty of the relationship has worn off, they are faced with the reality of what is happening. For men, this may prove confusing, and the solution is to step back and review the entire relationship from the start. If the connection is solid, they are bound to return and continue with the relationship. There is also the chance that they may come back and inform you that they cannot proceed.

4. He’s Afraid of His Feelings

Perhaps the most frequently cited reason why guys pull away is that they are afraid of their feelings.

That is, falling in love is scary, and men often just aren’t very good at processing the uncertainties and risks involved—or at least, not as adept as women are. They may be genuinely interested and like the idea of a relationship but have difficulty wrapping their heads around the emotional implications.

So, he seemingly hits the brakes. Or at least, he shifts things into a lower gear to give himself some space and time to think. Of course, he didn’t ‘say’ that.

Often, they have a fear of commitment.

The idea of a romantic relationship can be exciting and intriguing, but the reality of what happens when it becomes a permanent, long-term commitment is pretty scary.

Loss of freedom and independence and the dreaded FOMO (fear of missing out) can conspire and converge and hit him like ice water on a previously smoldering fire.

6. He Is Emotionally Unavailable

This is based on the premise that men’s and women’s brains are biologically different. The limbic system, which is the processing center for emotions in the brain, is larger in women than in men. Therefore, women are more emotionally aware, and men struggle to get a clue about their feelings.

Sometimes, when all the early signals in a relationship appear to be green lights, you—and he— find yourselves going from zero to 60 in a New York minute.

One day you’re meeting for lunch or coffee, then you’re texting and exchanging phone calls, then you’re clearing out a dresser drawer for each other.

This may be a natural progression, but it’s also a critical juncture—and the perfect time for anxieties to make an unwelcome appearance.

Pulling away when this happens doesn’t necessarily mean game over. But it can mean a time-out to take a breath and make sure you’re both on the same page.

8. He’s Just Not That Into You

A.K.A the worst-case scenario.

An entire episode of Sex and The City (a popular HBO series in the ’90s, for all you Millennials and younger) was devoted to the many many ways that some women may rationalize and overanalyze the reasons why a guy doesn’t call, text, or email after a promising beginning. The truth is the guy just was not as blown away by you as he may have appeared and as you may have hoped.

There are lots more where those reasons came from.

Maybe he needs to feel more challenged, or he’s under too much pressure (work, finances, etc.), or he’s afraid of failure, or of losing his identity, or there are stresses in his life you know nothing about…

Yes, it is indeed perfectly natural for any woman to feel down when the man she is dating is pulling away. Wouldn’t be easier if he just had an open conversation about why he is doing so? Of course, it would! Unfortunately, sometimes relationships are like games. Some of us need to assume, guess, and understand what is going on. Each feminine woman will question their value when their man is pulling away.

However, what they should focus on is becoming a high-value woman by reacting to the pulling away in the following ways:

Be Confident in Yourself

When women start sensing their man pulling away, they often feel insecure and jealous. They lose sight of their needs and focus on proving they are the perfect match for their partner. Rather than act like this, it would help if you were confident and showed no weakness. The best thing is to be composed even when the relationship worsens.

The most common reaction when a man pulls away is to constantly text and call your man. Don’t. Take time and examine your own needs. Over-texting will lower your self-esteem and confidence, undermining you’re being a high-value woman.

Maybe all that the man needs is time. Instead of pestering him with texts and calls, give him time to reflect. After a while, he will either realize your value and come back apologetic or determine that he doesn’t want to be in the relationship. Either way, you will have a clear answer after a while.

The man should not take your entire focus. Remember your own value and work on improving yourself. It could be anything from working out to reading more books, eating healthier, or taking solo travels.

The goal is to find your value and not let the man pulling away affect you in any way.

Commonly Asked Questions on How to Become a High-Value Woman

Q: How do you respond when a guy pulls away?

A: Take time and reflect on why he may be pulling away. Also, try to focus more on yourself and less on him.

Q: What should you do when men start pulling away?

A: Do not bombard him with texts and calls. Let him take his time and get back to you when he figures out what he wants. In the meantime, work on yourself and improve yourself to be the high-value woman that you are.