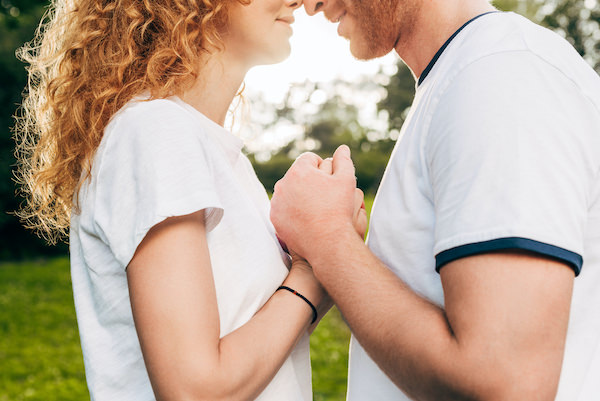 Whether you just started dating or you found the one and want him to propose – taking your relationship to the next level is a huge step.

Perhaps you’re uncomfortable directly asking your man to be exclusive, move in together, or get engaged, but there are ways to get your man to commit to you without pressuring or threatening him.

Using your anger and resentment against him will NOT work. Mind games, tricks, and pressure tactics also aren’t good solutions. They ultimately lead to arguments or painful breakups.

Yet you might yearn for your man to be yours and yours alone. You want to be his one and only. If that’s the case – you need to get him to commit.

Even though you might logically know that nothing in life is guaranteed, there is something precious about having the man you love making you a promise and doing his absolute best to stick to it.

Are you willing to make the necessary sacrifices – to do YOUR part to get your man to commit?

Commitment doesn’t just happen. There are steps you need to take to trigger commitment.

Doesn’t it feel better to be in a committed relationship instead of dating many men or hooking up?

If commitment is important to you, and you want the stability and security that comes with it, read on for the secrets to getting your man to commit without the games and pressure!

Universal Tips for Any Type of Commitment

Maybe you’re hoping for an exclusive dating relationship – or perhaps you’re ready to move in together or even get married.

Whatever type of commitment you’re seeking, follow these tips for the best possible outcome.

1. Drop the Desperation and Neediness

And under NO circumstance should you ever chase him.

Maybe you know you want him, and you’ll do anything to get what you want. But resist the urge to chase him.

It’s OK to show interest and flirt, but there’s no need to answer texts or snaps immediately. Don’t freak out if you don’t hear back from him within two minutes!

2. Show Him Some Respect

A man wants to earn the respect of the woman he loves, viewing himself as a hero and problem-solver. He wants to feel wanted and valuable, like someone his girlfriend genuinely wants and needs to have around.

He doesn’t want to be your accessory, best friend, or partner in crime. He wants you to turn to him when you need help. So, show him what you need and allow him to step up.

Of course, you don’t need your man to rescue you – but always remember your man wants to be respected, to be your “hero,” and your protector. It’s in his DNA.

Avoid putting your life on hold when you’re dating or in a committed relationship. See your friends, pursue your goals, and live your life!

It’s OK if your man misses you sometimes. You don’t need to spend 24/7 together! Avoid relying on him and whether or not he’s committed to you to find happiness and purpose.

Your schedule, emotions, and life plans don’t hinge on what your man is doing with his life. Instead, embrace your inner self-confidence and remember your worth.

In a way, you need to make him prove himself. Don’t plan everything around him or give him everything he wants.

Seducing him into a commitment won’t work. It might even do the opposite, where you realize one day that he’s using you for sex – or resenting you for dangling it over his head.

Instead, strengthen your connection so that sex doesn’t make or break the bond. Remember: he will never commit to you to get more sex.

In other words, don’t be a doormat! Balance your strength and independence, owning your opinions and priorities, with the care and attention you show your man.

Stick to your standards – and be consistent. Your man should earn your trust and love, and if he behaves unacceptably, call him out in an honest and straightforward way.

Let him know how much you care while emphasizing what he did wasn’t OK.

Valuing commitment is OK, but trying to fit a guy into all of your expectations and labels at the expense of letting a natural connection develop is another thing entirely.

Have reasonable boundaries, but don’t burden your man with a lengthy list of demands and expectations.

8. Allow the Relationship to Flow Naturally

The conversations, sex, advice, and bonding should all feel natural. It’s OK to check in occasionally with your man about where he’s at and what he’s feeling.

Your man has to know it’s safe to open up to you  – no matter what he has to say. Avoid forcing conversations or freaking out if he tells you what you don’t want to hear.

9. Give Him His Freedom

Your man must understand he can commit to you and still have his freedom and space.

His friends, time alone, weekends playing sports, and any other interests he has should remain a priority in his life.

If he thinks you will ask him to cut out the different parts of his life, why would he want to commit to you?

Make him understand that you love and respect him enough to let him still have his life. He’ll be more likely to commit to you.

10. Know When to Be Vulnerable

Your strength and independence are a turn-on, but showing your vulnerability and opening up is also necessary if you want to trigger the part of him that wants to commit to you.

So, ask for his help, talk about your bad day, and let your emotions out.

There is a time to be vulnerable, and your man will be even more attracted to you when you let your guard down and let him be there for you.

Your man wants to make you feel special and treat you right. It’s also essential for you to make him feel special, nurtured, and heard.

There is no need to pretend to be something you’re not. Your man will fall in love with you – not a fake version of who you think he wants you to be! Be 100% YOU.

13. Be His Cheerleader and Safe Haven

Be your man’s biggest fan and safe haven from the daily storms of life. Stand by him, compliment him, and support his dreams.

Life can be challenging, and having you in his corner will mean a lot – especially when he imagines a future with you.

Ultimately, he will see that he’s found something with you that he hasn’t found anywhere else.

If you commit to following the above tips, you’re more likely to get your man to commit. The main takeaways are:

Sometimes the man you are with won’t be ready or willing to commit, and you have to accept that and decide whether it’s time to break things off and move on or stick with him longer.

Next, read specific scenarios that might apply to your situation.

You feel ready to move forward in your relationship and want a commitment to date exclusively. But, unfortunately, your guy hasn’t brought it up.

So, should you wait it out?

Or continue to date other men?

You’ve seen the signs that your man is into you. But you’re feeling impatient. He hasn’t expressed his desire to be exclusive. Here are some ways you can give him the signal that you’re ready:

The critical point is that you can start the conversation to begin to move things forward – regardless of the outcome.

Deciding to date exclusively doesn’t mean you’re getting married – it just means you have decided to focus on each other because you think there is potential for something great together.

Commit to a Serious Relationship

You’ve been dating exclusively for a while, and you’re wondering when you’re going to commit to a more serious relationship – and maybe even move in together.

First – let go of a timeline.

Perhaps you expect that commitment (or even moving in together) should happen after a specific number of dates or after so many months have passed.

It might feel safe to dump him if he doesn’t meet your timeframe.

Better to end it than get hurt, right?

Unfortunately, life doesn’t always follow timelines. Neither do people. Some men are ready for commitment sooner, but some men require more time.

While there are many reasons for this, none necessarily have to do with the value of the relationship.

If your relationship has real potential, you’ll see progress toward a more serious commitment like living together.

So, right now, make an effort to be present without thinking too far ahead to how things will be a month or a year from now.

Enjoy the journey without concern for how the path may look – taking the pressure off of you and your man.

If you are starting to wonder and question where the two of you are headed – ask! You might worry about pressuring your man or coming across as pushy.

Your man is less likely to become defensive if you’re genuinely curious.

Make sure to be prepared with your answers so you can share with him how you’re feeling, too. Instead of making demands, state your preferences.

For example, you might say, “I’d like for us to take this relationship to the next level; what do you think?”

Perhaps you discover he’s not invested in the relationship and has no plans to commit.

So timing isn’t the issue, and maybe it’s time for you to move on. It might be hard to hear this, but it’s better to know now than invest more time, energy, and emotions into something that isn’t going anywhere.

You might hesitate to state your preferences and ask these questions because you’re afraid of how your man will respond.

However, always keep in mind that you deserve to be with someone who wants to commit to you.

Lastly, avoid dating men who pull away when everything seems to be going well. This may be a sign that they’re not ready for a serious relationship.

So, you’ve been together for a while, and you know you want to get married. But your boyfriend hasn’t asked you to marry him yet, and you’re wondering how you can get him to propose.

What do you do?

First, talk to him about what you want out of the relationship and let him know that marriage is essential to you.

DON’T make the mistake of pushing your man to propose or constantly talking about marriage because that will turn him off to the idea of getting married.

Instead, do the following:

No matter your circumstances, the problem isn’t that you want more of a commitment than your man does. The issue is how you go about asking for and expressing your need for more commitment!

You don’t want him to feel like committing to you is an obligation.

Now you’re equipped with tips on how to get him to commit without playing games, pressuring him, or making him feel obligated.

No matter what you do, don’t force it. Instead, let things flow naturally, keep your relationship light and fun, and give it time.